Crystal healing is one of the ancient alternative healing techniques aimed to restore balance, optimize the body and resolve

health problems on all levels - physical, mental, emotional and spiritual using various crystals and crystal devices. Gemstones have their specific vibrational rates and you can use them to create changes in the bio-field or aura.

Our High Energy Crystal Pendulums also contain specific subtle energy charges. The are permanently connected to the Crystalline Grid of Earth on a sub-atomic level and will create a field of protection around your body that will get to work converting stagnant, dark, inharmonious energy into vibrant, healing energy.

Wearing it while driving will boost your bio-response  you will be more alert and less prone to drowsiness and fatigue and affected by electro-magnetic fields.

To use use this device in a passive way  just wear it! Using Crystal Pendulums in an active way requires the basic dowsing knowledge. You use it as you would any energy pendulum with additional benefits of the crystal itself.

The strong intent is the most important element. You can either say it in your mind, say it aloud or even write it on a piece of paper.

The High Energy Pendulums generate all Radiesthetic colors including gold, except the negative green. Use them to  charge other objects with this beneficial energy simply by holding it over the object and asking to charge it with the energy of Crystalline Grid of Earth and then linking to it. Usually the pendulum will start rotating clockwise. When the pendulum stops moving  the object is fully charged. You can charge your favorite jewelry, drinking water, food, medicine, dowsing tools, etc.

The Power Pendants and Power Earrings give the opportunity to experience the crystal healing vibrations in a passive way while wearing energy charged jewelry.

Crystal healing is an alternative medicine technique that employs stones and crystals as healing tools.

The practitioner places crystals on different parts of the body, often corresponding to the chakras, or places crystals around the body in an attempt to construct an energy grid, which is believed to surround the client with healing energy. The healing is supposed to remove blockages in the aura or the body's electromagnetic field.

When the stones are placed in the area of the chakras, the colour of the stones may correspond to the colour which is associated with the corresponding chakra. Going from the tail bone to the top of the head, the colours are red, orange, yellow, green, blue, indigo, violet.

Different stones are believed to have different healing vibrations, so a treatment based on the type of stone may be used instead. Stones may also be used at the feet in an attempt at grounding the individual, or held in the hands. Practitioners may also use tools such as crystal wands, which are placed near the receiver's body, or near a certain 'blocked' chakra, or use to perform psychic surgery, normally conducted with laser quartz wands.

Believers in crystal healing may carry crystals around with them, believing that they impart healing powers to them wherever they go, or that they have positive vibrations that attract positive events and interactions with others.

Naturally Attract Power, Wealth And Success Into Your Life By Listening To Amazing Recordings Based On Latest Technology. 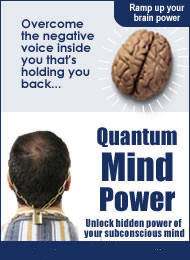